Clock 30, the second of 3 Beginners clocks, is again based on the same principles that links them all, and that is they are designed such that all the complicated cutting work is carried on the CNC router, you won’t need a lathe or Milling machine, just simple hand tools.Just one exception to this is you would be advised to at least have a Drill stand so that you can accurately drill holes’ square to the wooden surface so that the shafts that fit into the holes don’t see any unnecessary friction due to angular misalignment.

This clock, whilst similar to Beginners clock 1 has some refinements that endeavour to make it little more refined. The gears themselves have more delicate webs and the gear shafts have a 4-rod construction that provides strength and rigidity. This approach looks more refined than the Clock 25, whilst being slightly more difficult to construct.
Another feature of the Beginners clocks is the simple winding arrangement, with a single cord wrapped one and a half times around the drum, with a bottle of water as a weight and a couple of large nuts as a counterweight.

The Dial has been designed so that you can either cut it all out on the CNC router using a ‘Vee’ bit cutter to engrave the numerals or as a simpler alternative, you can cut the Dial blank with a recess for the Chapter ring that can be printed on a card.

I also set myself a challenge this time to build the clock entirely from timber salvaged from a Pallet, this turned out to be very hard going as the salvaged wood required quite a lot of work to make it suitable for use in the clock. and promptly fell out when machined. The biggest problem in tackling the project in this way was that the wood itself was actually Pine and not really suited to the to the cutting of the intricate gears, as on several occasions the timber would split or splinter spoiling the part. To overcome some of these problems I used a low viscosity Superglue to seal the faces of the gear teeth, so they would stand up to the loadings applied to them. It was also necessary, because of the softness of the timber used, to put small plastic bushes into the pivots for the shafts. If you are going to use a harder, finer grained wood like Maple then this will not be necessary.

In the end, after several remakes, a working clock was constructed and it actually turned out quite well, keeping a good time and running for 8-9 hours.

I can’t say that I would use this approach again as the work involved in salvaging the timber from the Pallet, and the rather inferior finish obtained using Pine instead of Maple or Cherry actually spoilt the appearance of the finished clock.

If you want to cut out parts on a scroll saw you can use the the PDF file included with the purchased downloads to do this. This PDF is one big sheet of all the parts so you will need to follow the PDF printing instructions below.

Details of the materials and equipment needed to build this clock, along with Hints and Tips. 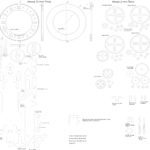