Clock 17 The flying pendulum clock is a clock that uses a flying pendulum escapement mechanism. A small metal ball, connected by string wraps around one brass post, then unwinds before repeating on the other brass post.The flying pendulum clock was invented and patented in 1883 by Adler Christian Clausen and J. C. Slafter in Minneapolis. The clock was later called the Ignatz Flying pendulum clock after a character in the Krazy Kat comic have taken the original A C Clausen design and adapted it so that it could be constructed on one of the my earlier wooden wind up clock bases.The proportions of the flying escapement have however been maintained so that the originality of the original design is preserved.The Clock is relatively simple to build having only 5 actual gears, the pinions being replaced by pins set into the the gear sleeves.

The frame is constructed in the traditional manner with small wedges being used to holding the Front and Back frames tightly in position against the cross struts.

The clock was never really a good time keeper and this version is no different in that respect. It is a novelty really, but to watch it in operation is still fascinating.

The clock is driven by a spring mounted inside the bottom gear, giving you the convenience of being able to place the clock in any position within your home.

I have used miniature ball bearings to support all the shafts to reduce friction and ensure that the spring drive can run efficiently. The bearings can be obtained from www.technobotsonline.com 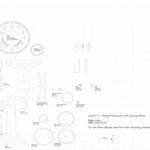